Some time last year I was in a natural history gallery with a Natural History Museum educator from the USA. I asked her, “What question do children most commonly ask in your museum?”, already anticipating that the answer would be, “Is it real?”. I was right, of course, with children’s favoured question number two, on both sides of the pond, being, “Did you kill it?”.

The world over, young children seem to be totally baffled by taxidermy. A couple of months ago I visited the Oxford University Museum of Natural History with my two nephews, aged seven and four. They spent most of the visit trying to get their heads around the relationship between ‘real', ‘alive' and ‘dead'. “But when are we going to see the real ones?”, they kept asking. And they weren’t convinced by my patient, rational response that these were real, they were just the skins of dead animals that someone had stuffed to make them look alive. To the boys, ‘real' meant ‘alive'

This confusion isn’t just limited to young children. When I worked at Thinktank, Birmingham’s science museum, a teenage girl once pointed to the taxidermy display and asked me, “Miss, are those animals real?”. When I replied that they were, she then asked, “Miss, how do you make them stay so still?”.

Museum curators and educators can be either amused or exasperated by these questions. But it’s worth remembering that at its heart is children’s real desire to make sense of their world. I recently read an interesting journal article that took an evolutionary psychology approach to exploring children’s understandings of death. The authors argued that, throughout human (and pre-human) history, it has been important for people to distinguish dead animals from those that are still alive (either because they might be good to eat, or because they might be wanting to eat you). If this need has had any impact on the development of our brains, then we should expect children to assume that an animal is alive, and remain suitably vigilant towards it, unless they have good evidence that it isn’t. This evidence might, for example, be that they saw the animal being killed, or that they can see that its head is missing and there is blood everywhere.

This would certainly explain children’s confusion concerning taxidermy, where there is some evidence of the animals being alive (standing up, eyes open, no bits missing), and some evidence of them being dead (not moving, adults around them acting as if the animal is not alive). Given this conflicting evidence, children spend a lot of time and effort trying to make sense of exactly what is going on with these weird, lifelike, deathlike animals. 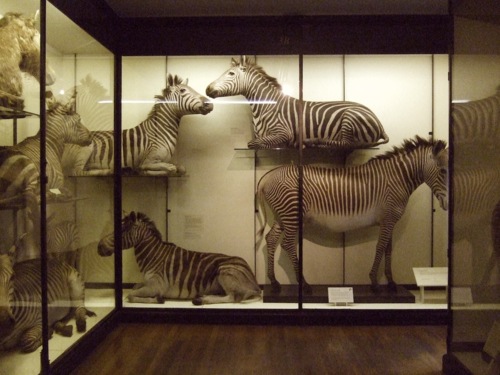 This effort to explain taxidermy leads to some children making some impressive logical leaps. I saw one particularly brilliant example in Tenby Museum, in Pembrokeshire, Wales, a couple of years ago, one little corner of which is shown in the above photograph.

Two children, a girl aged around six years and her older brother, were discussing this rather eccentric display of seashore wildlife, rather charmingly displayed in an alcove behind a shop curtain, and under a handy sign, should anyone be unsure what they are looking at. They were arguing fiercely about the ‘realness' of the animals, with the little girl insisting they were real, while her brother insisted they weren’t. In the end she trumped him with her little sisterly logic:

“They are real,” she declared, “but their owner is being paid by the museum to make them stay still.”