A while back, I discovered that Derby Museum and Art Gallery was about to open a new natural history gallery. This was exciting to me for three reasons: firstly, because I ‘collect’ natural history galleries by visiting as many as I can; secondly, because Derby is very easy for me to get to; and thirdly, because the new gallery had the incredible name of ‘Notice Nature Feel Joy’. This I had to see. [Read More]
children  Derby  emotions  exhibitions  museum  natural history  visitors

Seeing Voices in the Museum

Human beings are incredibly social animals. This manifests itself in a whole host of ways—from our desire to share ideas and conversation, to our tendency to see agency and intention in inanimate objects (‘my computer hates me’), to our ability to form relationships with everything from people, to cats, to cars. If museums are clever, they can make use of this inherent sociability to create some really compelling exhibitions. This was revealed to me particularly on a recent visit to Manchester Museum, where I was delighted to have a good chunk of time in which to explore the new Living Worlds gallery, which reopened last year. [Read More]
death  emotions  exhibitions  language  museum  natural history  taxidermy  visitors

Evolution galleries: Humans and other animals 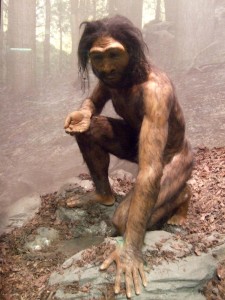 I’ve been interested in human evolution ever since spending time learning about it during my Human Sciences degree in the late nineties, so whenever I’m in a museum with a human evolution gallery, my antennae start quivering. I’ve visited a couple in the USA over the past few years — one in the American Museum of Natural History in New York, and, last year, in the Smithsonian National Museum of Natural History. I just love the idea of looking back at our ancestors, and also of being reminded that over the past few million years other species of humans and hominids have existed, often in parallel with each other.

I’m used to seeing these galleries, or even the single human evolution cases in some museums, presenting the various human species on their own, or maybe alongside a few other primates. The museums nip off a single twig of the evolutionary tree, usually starting with modern humans evolving from something like an australopithecus, and maybe hinting that these evolved from an earlier primate species.

Yesterday I was in London for a meeting, and managed to carve out a couple of hours to visit the Science Museum. Given that I spent eight years of my life working in science museums, and that I now research museums, it was a shock to realise that it’s probably been over half a decade since I’ve visited the UK’s largest and most famous museum of science. In spite of the fact that I inevitably get lost there, my first mistake was failing to pick up a map as I came in. [Read More]
emotions  exhibitions  museum  Science Museum