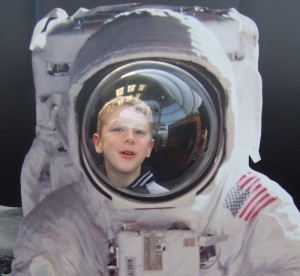 Last weekend I visited Leicester’s National Space Centre with my seven year old nephew, Reece. As a researcher, I have an annoying tendency of carrying out experiments on my poor nephews. I decided a little while ago that I’d like to start visiting museums with families that I know, and, just as I did during my doctoral research, giving the children cameras to record their visits. The main difference from my PhD research would be that this time I would actually get to join in with the visit. So this was my first attempt at this new project. It was also Reece’s first visit to the Space Centre.

In spite of being related to me, Reece’s family don’t visit many museums, preferring more energetic and outdoor activities. Over the past few years I’ve taken my nephews to an animatronic dinosaur exhibition, to Thinktank, the Birmingham Science Museum, and to the Transport Museum in Coventry. Reece also told me that they’ve been to the Sea Life Centre. This is probably more museum visiting than many children manage, but still not enough to make these comfortable and familiar places to be. It also became clear that Reece doesn’t have a strong personal interest in space as a topic, so the actual theme of this centre didn’t give him any hooks upon which to hang his understanding of where he was and what was supposed to happen there. What all of this meant that the really interesting thing about our visit to the Space Centre was the number of ways in which Reece connected this unfamiliar, over-stimulating, and confusing place to things that were familiar and comprehensible to him.

The first of these was probably the simplest, and certainly the most obvious to any museum educators out there. The activity that really dominated Reece’s attention and therefore our visit was an incredibly simple trail. On his previous visit to the Sea Life Centre, Reece had completed a trail, so he was happy to have the same sort of activity here, and also completely determined to complete it (he’s scarily competitive!). In fact, when, five minutes before we had to leave, we still had two blank answers, Reece made me go and get the answers from some members of staff, so he could finish the trail and get his sticker. There can be a tendency for museum professionals to be a little snooty about this sort of trail sheet. But in our case, the trail gave us a familiar and straightforward activity that gave a direct purpose to exploring this unfamiliar place. The point wasn’t to find out things about space, but to find out about this space.

Like all science centres, the Space Centre is full of information and interactive exhibits. It also has a reasonable number of objects on display, including model and real rockets, satellites and space suits. Reece, like many children I have seen in science centres, homed straight in on the interactives, and was absolutely uninterested in reading anything, either information or instructions. The main interactives he wanted to play with were those that involved screens, but they needed to give immediate feedback, and for him to feel like he was doing something. Videos were no good. Interestingly, he was willing to queue for surprising lengths of time to get to play on something that interested him. I wonder if part of the reason for his seeming patience is that it actually gave him the chance to watch other children and learn what to do.

After the visit, I asked Reece what he had liked the most. His favourite thing was a water-powered rocket. The intended purpose of the exhibit was to make visitors think about how a rocket’s power had to match its payload. But, in reality, all this meant for Reece was that sometimes the buttons he pressed made the rocket went off, and sometimes they didn’t. I think possibly the fact that the rocket didn’t always take off made it more exciting when it finally did. There was an additional hook here, and it wasn’t that these tiny plastic rockets were supposed to represent the huge space rockets behind us. Instead, the hook was that this exhibit was already familiar, as Reece remembered seeing the same type of rockets in Thinktank’s science garden. He was therefore happy to recognise them and play with them again here in the Space Centre.

The final familiar activity I want to talk about here is the camera that I lent to Reece throughout the visit. He actually took very few photos, claiming that he wanted to make sure the battery lasted. Most of his photos were taken while he was waiting: for me to get the tickets, for the planetarium show to start, and for me to pay in the gift shop. In spite of his lack of actual photography, he was very happy to carry my camera on a strap around his neck, and only a few times passed it back to me when it got in the way of his playing. During my doctoral research with children, cameras and museums, I noted that young children seemed to enjoy being in control of a piece of grown-up equipment. This seemed to be very much the case with Reece. But the camera was also something else familiar to use within the unfamiliar Space Centre. At the same time, I was carrying my own DSLR camera, and so occasionally we would stop and take photos of the same exhibits. This, too, seemed to be a way for Reece to get used to how to be and what to do in this place.

Our visit highlighted for me some important issues with science centres in general. Science is often abstract or difficult to imagine, and doing science involves both time, and commitment to learning a significant amount of information. Yet science centres often market themselves to quite young families, and to the age of children who move quickly and read little. This can lead to frustrations where it seems that children are not making the most of their visits (I paid £24 for the two of us to get in here, damn it!). But these are big, complicated spaces, full of big, complicated ideas, and getting your head around the geography of the space, and figuring out how it relates to the more familiar world, is necessary before you can even begin to look at the words or think about the concepts.

What I really appreciated about the National Space Centre was that (assuming you pay gift aid) your ticket is actually valid for a whole year. This gives children the opportunity to make these connections and then build on them. It is only once the place is familiar and comfortable that young children can start to explore the things that the science centre thinks people are there to find out about. Maybe we will return  there in a few months time, and maybe our second visit will be a little bit less focused the space of the centre, and a little bit more about outer space.